Great news! We have a new, iOS jailbreak for those on iOS 12 to iOS 12.1.2. Called RootlessJB, the tool is still in the early development stages, but you can install it on your iPhone or iPad right now.

RootlessJB is a jailbreak utility released by Jake James, a well-known security researcher, and it is based on the voucher_swap exploit from Brandon Azad. Rather than being a root jailbreak like Electra, Unc0ver, and some of the others we have seen recently, rootlessJB only contains permissions for reading and writing to the var subdirectory; the root jailbreaks offer complete read and write access to the whole root filesystem on the device. 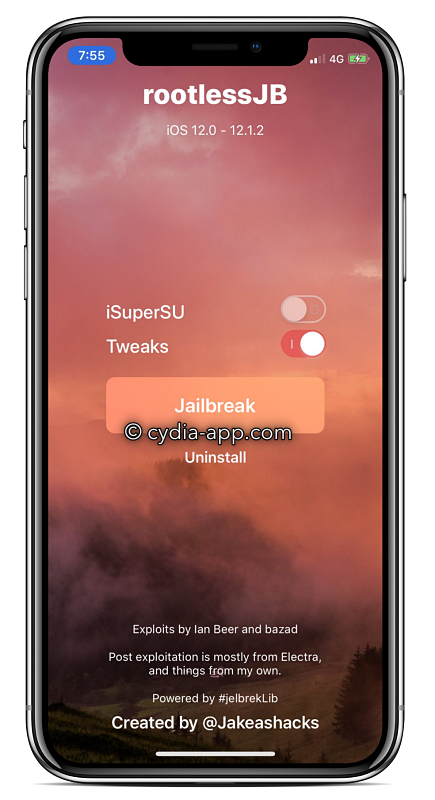 RootlessJB is compatible with the following devices on iOS 12 through to iOS 12.1.2:

If you have a compatible iOS device on iOS 12 to iOS 12.1.2, you can follow these steps to install the jailbreak. DO make sure you back your device up first, using iTunes and/or iCloud – if you don’t and things don’t go to plan, you will lose everything on your device.

Unofficial apps are the bane of Apple’s life, and they will do what they can to prevent us from using them. The Untrusted Developer error is just one of the things they will do, but you can get around this quite easily:

Jake James is still developing his jailbreak tool and, over future updates, you can expect the following to be included:

A developers-only version is also available. Follow the link below for the zip file download from Github.

The jailbreak is SSH-based, which means users will need to use SSH to connect remotely to the filesystem on their device and modify it; SSH is spawned via DropBear.

James Jake does confirm on ( twitter ) that there will be support for the A12 device in the near future, along with support for the older A7 and A8 chips when an exploit is found.

The jailbreak development scene has been quite busy just recently, which is great news, and there have been several exploits for iOS 12 being discovered.

Are you going to give rootlessJB a try? We will keep you updated with new developments in this jailbreak, so follow us on Facebook and then like this page. Click Following and select See First – that way, all the updates will be published straight to your timeline.