TweakBox is one of the best, most robust, of the application installers that helps us to install third-party apps and games on our iOS devices. Perhaps the most crucial factor is that it doesn’t need a jailbreak to make it work, opening it up to many more users.

This app installer is regularly updated, not just with new content, but with support for the latest iOS versions and security fixes. Many of the included games or apps come with a few extra tweaks added to make them work better and offer more functions. Check out the ( infographic ) below.

Tweak Box is a feature-packed app installer, more like a third-party app store. Inside it, you will find thousands of different apps and games, including some tweaked and you don’t need to install Cydia on your device first. This is great news; so many users have been waiting for an alternative to Cydia for so long that this is expected to be an incredibly popular solution. And, because we don’t need Cydia, even those who never wanted to use it in the first place can now have some of the extra features. 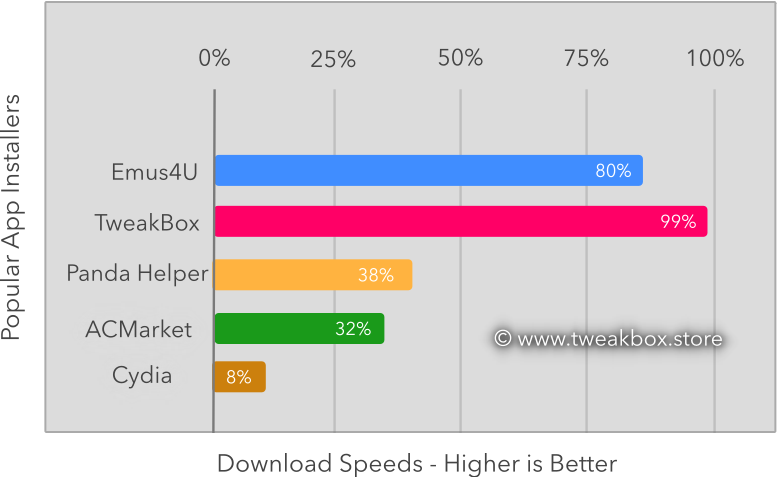 As you can see from the graph above, TweakBox app is faster than Emus4U app by a margin of 19% and a crazy 91% faster than Cydia, which is the original jailbreak appstore. When it comes to speed, Tweak Box is way beyond the reach of other app installers, which is why our users love us so much.

The obvious feature is in not needing Cydia to work but, as well as being incredibly easy to install and use, the developers have placed all the content into five categories, making it simple to find and download your apps and games. Those categories are:

This app installer is compatible with the following devices:

This app installer really is very simple to download. Follow the steps at the linked post below; you will have TweakBox on your device in a matter of minutes and a whole heap of useful content at your fingertips.

You won’t find Tweak Box anywhere near as comprehensive or in-depth as Cydia was but, for most users, it’s the best solution we have right now. It costs nothing to try it but, if you do find that you can’t get on with it, deleting it takes no more than a few seconds, and your device is restored to how it was.

Try Tweak Box in your iPhone or iPad today and tell us how you get on with it in the comments below. Follow us on Facebook, and we will keep you updated with all the latest developer updates.

Tweak-Box.com is a how-to tutorial blog. This website publishes tutorials for users to download 3rd-party apps on their smartphones. This site does not host any paid or pirated content or any iOS Configuration Profile. This site does not promote piracy. We are not affiliated with the developers of TweakBox app and function independently.